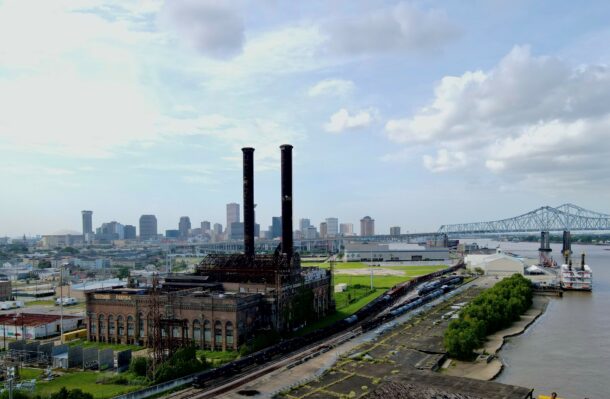 The Market Street Power Plant is now available for sale. Located upriver from the Ernest N. Morial Convention Center, the nation’s sixth largest convention center, this rare mixed-used development opportunity sits directly in the heart of the planned Entertainment District. The Entertainment District development parcel consists of 47+ acres that will include a 1,200-room hotel, residential, retail, office, and entertainment components.

The iconic MSPP was built in the early 1900s and provided power to the residents of New Orleans, solely until 1947 when the Industrial Canal Generating Station opened, until 1973. It began as one building and expanded over the decades, first with a boiler house in 1924, followed in 1926 by a 30,000 kW expansion at the rear of the property along Richard and Water streets, and shortly thereafter by the administrative facility. Between the 1930s and 1960s, three additional buildings were constructed. In 1922, the New Orleans Public Service, Inc., merged with numerous power companies and acquired the facility. Entergy Corporation succeeded NOPSI and still maintains a substation onsite.

Today the property consists of seven interconnected buildings with a gross building area of almost 163,000 sf on more than seven acres of land. It commands a dynamic location, bordered by the Convention Center as well as Lower Garden and Warehouse districts. It is also conveniently located to the Central Business District, with 15 Class A office buildings and more than 11.5 million sf of office space, and more than 6,700 residential apartments and condominiums. Also close by are the $500 million Four Seasons Hotel that is expected to be completed in early 2021, the newly expanded cruise ship terminal, and the historic French Quarter.

“This is a unique asset in a unique location in a unique city,” Mike said. “It is ideal for a developer who has the vision, the expertise, and the money to turn this exceptional piece of property into an exceptional, transformative commercial development.”